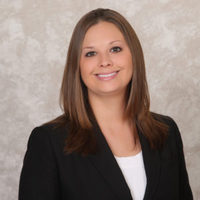 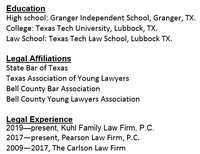 Renee Kuhl grew up in the great metropolis of Granger, Texas. After graduating from Granger Independent School she attended Texas Tech University where she earned a bachelors of science in Human Development and Family Studies. After earning her undergraduate degree she attended the Texas Tech University School of Law and received her Doctorate of Jurisprudence in 2009. She passed the Texas Bar Exam and was licensed to practice law in the State of Texas the very same year. She has focused her practice on Family Law ever since.

Renee is very dedicated to her work and believes that each of her client's concerns are very important. She does her best to personally understand their issues and be available for them. She believes that is crucial not only to represent their best interest but to also be a support for them through the hard times. She is married and has two precious little girls so family and children mean the world to her. She uses that drive to help as many people and families as she can.